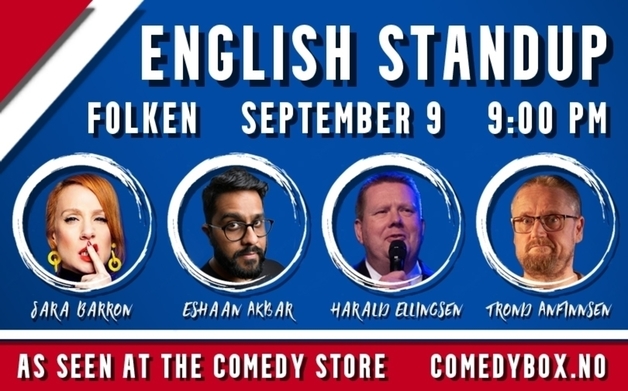 For 250 kroners you can experience the same comedians who do standup at the Comedy Store in London here in Stavanger + two local comedians in English.
This fall, we're putting up four English Nights - click the links to get tickets:
- September 9th
- October 7th
- November 11th
- December 9th

* Sara Barron is one of the fastest-rising comedians working in the UK today. Since her 2018 debut at the Edinburgh Fringe Festival, she has starred on shows including Live at the Apollo (BBC), Would I Lie to You? (BBC), and Frankie Boyle’s New World Order (BBC). A powerhouse live act, Sara’s two stand-up hours, "For Worse (2018)" and "Enemies Closer (2019)" have sold out at both the Edinburgh Festival and at multiple runs in London’s Soho Theatre.

* Eshaan Akbar has performed three sell out shows at the Edinburgh Fringe Festival – "Not for Prophet (2017)", "Prophet Like it’s Hot (2018)", and "Infidel-ity (2019)" as well as sell out London transfers at the Soho Theatre. He is known on Twitter as "Michael Pakintyre" - the Bangladeshi-Pakistani version Michael McIntyre. In 2016 he won the Piccadilly Comedy Club Comedian of the Year, and in 2014 he became a finalist in "So You Think You’re Funny". Eshaan has appeared on shows such as Mock the Week (BBC), QI (BBC), Frankie Boyle’s New World Order (BBC), and many many more.

* Harald Ellingsen is a veteran comic here in Stavanger with over 15 years of experience, doing countless corporate and club gigs. In 2010 he became a member of the four-man comedy group "Hot Shots!" (Eplekjekkasene), where they made two full-length shows, to great reception from audiences throughout Stavanger.

* Trond Anfinnsen debuted for Comedy Box in 2017 and has ever since been eager to get on stage as much as possible. He regularly performs on our weekly Stand Up Uncut shows, and the monthly club nights, as well as he travels around to other cities. His day job is being a High School teacher, which apparently makes up for a lot of good jokes.